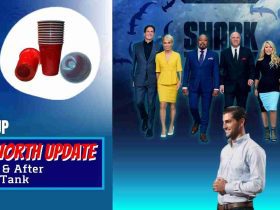 Coconut Girl Ice Cream pitch & bidding war on shark tank can be considered as one of the shortest. As Billionaire Mark Cuban Jumps right in to grab the deal to himself.

Read what happened to Coconut Girl worth and networth update in brief here.

Why is Coconut Girl Ice Cream so awesome?

Although it came into popular attention as Coconut Girl Ice Cream after Shark Tank, The real name of the business is Paleo Ice Cream Sandwich.

Coconut Girl Ice Cream is not your typical ice cream filled with Sugar. Instead, this is a complete alternative for Sugary un-healthy desserts. They market. They have been marketing their product on Instagram as a guilt-free alternative to satisfy your sweet tooth.

What could be better than a dessert without any sugar substitutes that still satisfies your sweet tooth? 🥥🍪🍨 Grab one of our Coconut Milk Frozen Sandwiches for a guilt-free, satisfying treat

Frankie Yamsuan was originally from the Philippines & she came to the US only when she was five. She also claims that during her childhood she had to go through difficult times and her mother used to work on two jobs. She struggles in specializing ‘one thing’ & she drops out.

During her pitch, She also claims that she was always being passionate about health & fitness. This was also one of her motives to innovate her Coconut Girl Ice Cream

At first she starts her business on her icicle tricycle. On weekends she drives her tricycle to fitness events.

After one such fitness event, she was approached by a grocery store asking if she can do wholesale. She had to improvise according to the situation. She said yes & gets her first wholesale customer.

This was her breakthrough. She then, by herself figures out ways to escalate her Coconut Girl Ice Cream business to further levels.

Frankie Yamsuan‘s one of life dreams was to appear on Shark Tank. To achieve that dream, she had to apply more than once.

“I remember going to the Food Expo the day after the open casting and running into Kristoff from Nui there,” she said. Nui is another food company that appeared on Shark Tank. “I didn’t recognize him at the casting but he introduced himself and we bonded for a few minutes about open casting and meeting again at the Food Expo in Anaheim the next day. Later that year, I saw them on Shark Tank!”

This was the latest motivation for Frankie for the reapplication to Shark Tank & she applied in 2019. As a result, she got the opportunity to appear on Shark Tank in March 2020.

What happened in Shark Tank?

Frankie’s business preposition for Sharks was to give 18% of her business in return of 180,000USD.

She immediately grabs the attention of all Sharks including Mark Cuban, Lori Greiner & Mr. Wonderful aka Kevin O’Leary.

Without giving any time for other Sharks to even think,Mark fires away his initial offer as 180K for 25% of the company. Mark Cuban demands on taking his offer right away or he will walk away if Frankie shows any interest to other Sharks.

However to save the day Kevin The Mr. Wonderful jumps in on bidding war putting a new deal on the table. His offer being 180K$ for 20% puts Frankie on the fence.

However Mark Cuban, The wealthiest man of all Sharks reinstates his offer but this time only matching Kevin’s offer.

Frankie- The Coconut Girl does not dare to think twice. She shakes hands with Mark Cuban closing the deal with him

Mr Wonderful demands a huge thanks as he helped Frankie to save 5% of her company.

The net worth of Coconut Girl Ice Cream Business

With the recent Shark Tank deal, Frankie’s Coconut Girl Ice Cream Business may have a worth of 900,000$ which is almost 1M$.