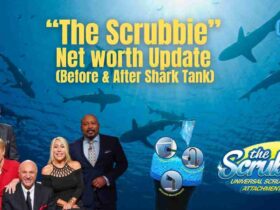 “The Scrubbie” Net worth Update (Before & After Shark Tank)

Shark Tank is a tv show that inspires entrepreneurs from around the world to pitch their business models to a panel of investors and persuade them to invest money in their idea. So far Shark Tank has cast 13 seasons with over 460 episodes. In each episode, real-life giants in the market (referred to as Sharks) evaluate three or four new products and services.

Shark Tank has not imposed any barriers based on demographic factors such as gender, and age. It is an aspirational television show full of education, fun, thrill, and knowledge. Let’s find out more about Shark tank.

How did it start?

In 2001, the Japanese have introduced a TV show called ‘Money Tigers’. In the show, local entrepreneurs have presented their business ideas to a panel of investors to expand their business ventures.

The concept has inspired the British to produce ‘Dragon’s Den’ and on 9th August 2009 Shark Tank was aired as the American franchise of Dragon’s Den.

Mr. Mark Burnette is the producer of Shark Tank. Back in 2009, Mark was a British television program producer and now, he is the chairman of MGM Worldwide Television Group.

Where is Shark Tank based?

Shark Tank show is based in the United States of America.

What does Shark Tank do?

Shark Tank connects entrepreneurs and investors. It provides opportunities for entrepreneurs to materialize their dreams in the real world with financial assistance.

Why is Shark Tank so popular?

Shark Tank gives hope to the ones with an entrepreneurial mindset. It telecasts how individuals get to their dreams. Shark Tank shows the process of how a fellow entrepreneur wins his/her business expansion and reaches their expectations in the business world.

Sometimes the show is educational, formal, and on point but sometimes it takes a friendly business conversation mode. Shark Tank is popular among entrepreneurs around the globe because its thrilling telecast nature.

It has won Primetime Emmy Award for the Outstanding Structured Reality Program four conceive times from 2014-to 2017.

How much does it cost to be on Shark Tank?

Anyone who wishes to participate to pitch their business should first admit to the pre-audition session. This can be arranged by reserving a position for them over the phone or by visiting Shark Tank’s official website.

Each application is examined and only the selected ones will get a response for the pre-auditions.

An entrepreneur is an asset to the sharks. So to own as an asset, sharks should pay the privilege to the producers. According to Mr. Daymond, appearing for a single season on Shark Tank the cost vary from $1-5$ million.

How Is a Business Valued on “Shark Tank”?

So this business is valued at 1 million in the shark tank.

Can Shark Tank steal your idea?

The answer is no. Each new entrepreneurial concept present in Shark Tank is secured irrespective of the result of the deal.

It is a fair doubt because of the nature and the level of publicity of the show. But contestants have nothing to worry about since there is legal protection for each innovative idea.

How to watch shark tank episodes?

Hulu offers 30-day free trial and has many suitable streaming packages to choose from.

The popularity of Shark Tank is the main reason for many other shark tank programs in several other countries.

Now there are lots of versions of the Shark Tank show. Based on location and the country, everything changes. Here are some of the major international versions of Shark Tank.

Shark Tank Australia aired for four seasons from 8th February 2015 to 7th August 2018. The show has provided a great opportunity for motivated Australian entrepreneurs to firmly establish their business ideas.

Also read: what happened to the AUUG motion synth after the Australian shark

Shark Tank India had been aired on 20th December 2021, on Sony Entertainment Television.

Out of the 62,000 applications, 198 were chosen by Sony Entertainment to present their business ideas to the selected Indian sharks, Ashneer Grover, Anupam Mittal, Aman Gupta, Vineeta Singh, NamithaTahpar, Ghazal Alagh, and PeyushBansal.

Sony entertainment brings Shark Tank India to you from Monday to Friday at 9:00 pm and the televised reply air at 11:00 pm every weekday.

Shark Tank Mexico also known as, Negotiating with Sharks, Trading with Sharks. The program has many names. It has launched six seasons so far and the seventh is scheduled for the year 2022.

Sony Pictures Television is planning to do some major changes for the upcoming season seven. Three original sharks of the show Mr. Arturo ElíasAyub, Mr. Rodrigo Alonso Herrera Aspra, and Mrs. Ana Victoria GarcíaÁlvarez will be out and Mazatlan Hotelier , Ernesto Coppel , Alejandro Litchi will feature into the tank.

The Billion-Dollar Deal is the Vietnamese name for the English name Shark Tank. The show is exclusively for Vietnamese business startups.

The Billion-Dollar Deal program is produced by TV Hub and is televised via the VTV3 channel of Vietnam Television. There are seven giant sharks in the Vitamin shark tank. Namely Pham Thanh Hung, Nguyen XuanPhu, Nguyen Thanh Viet, Nguyen The Lu – Louis Nguyen, Ms. Do Thi Kim Lien, Nguyen HoaBinh, and Ms. Thai Van Linh. So far the show has passed four seasons and some investors like Ms. Thai Van Linh were present in each

There is no official announcement but according to Himalayan TV, all the things are to bring Shark Tank to the Nepali atmosphere. Shark Tank Nepal will give hope to Nepali business startups.

According to rumors BishwasDhakal, Chandra Prasad Dhakal, Binod Chaudhary, VidushiRana, SurajVaidya, and PrabalSaakha are the possible judges of the Nepali version of Shark Tank.

Shark Tank Malta will premiere on the 10th of April 2022. The show will be broadcast on the Television Malta at 8:50 pm on weekly basis.

According to the news from Television Malta, filming of Shark Tank Malta started weeks ago and reached half was in March 2022. At the moment the sharks have already invested over €1 million on some of the selected business concepts pitched to them.

In Shark Tank, investors are commonly known as Sharks. Each shark is specialized in a unique business venture but sometimes when a shark gets inspired by a certain concept they break their comfort zone and invest with confidence.

ABC’s Shark Tank has two types of sharks. Sharks from the core group and sharks from the guest group. In the core group, there are six investors, Daymond John, Barbara Corcoran, Robert Herjavec, Mark Cuban, Kevin O’Leary aka Mr. Wonderful, and Lori Greiner.

In each episode, five of these sharks seek the best ideas to invest in. Shark Tank invites guest sharks from time to time, based on the special characteristics of the show.

Lori Greiner is a creator. Does ‘The Queen of QVC’ ring a bell? She has created over 600 products and holds over 120 patents. She is the founder of the ‘For Your Ease Only’ agency. Her net worth is $150million.

Mrs. Barbara Ann Corcoran is an American businesswoman, social influencer, speaker, and author. She’s the founder of the Corcoran report and now she works as a contributor to The Today show on NBC.

Mr. Daymond John: Founder of FUBU apparel company, CEO and founder of Shark Tank group, opportunist, a believer in education and learning new skills. His net worth is over $350 million and his apparel brand is expected to generate over $6 billion in revenue in the future.

Robert Herjavec is a Canadian businessman, investor, and television personality. He works as a shark since season 1 and he is a cast member of the Canadian TV series ‘Dragon’s Den’. He was the founder of BRAK Systems which he sold for $30 million, CEO and founder of Herjavec Group (IT Security), and he sold RAMP Networks to Nokia for $225 million.

Mark Cuban is the great white shark. As of January 2022, Mark’s net worth is over $4.7billion. Most of his fortune was gathered by selling Broadcast.com to Yahoo for $5.7billion and he is the owner of landmark theaters, Magnolia pictures. He is the co-founder of AXS TV, Dallas Mavericks.

Who is the most successful Shark?

Bombas considers the most successful business that pitched in the shark tank. Mr. Daymond John got the Bombas deal. However, Bombas’s deal does not make him the most successful shark. Ms. Lori Greiner has got four out of the most profitable eight deeds in the Shark Tank. So it is impossible to assign the ‘most successful’ phrase to one particular shark.

Who is the richest shark?

Among all millionaire sharks, Mark Cuban is the only billionaire. So technically he is the richest among the sharks.

Are shark tanks pay for the sharks?

There are two arguments. One says Shark Tank provides an opportunity to generate wealth for sharks. Hence there is a fixed charge per season for each shark. Facilitating this argument Mr. Daymond once stated that he pays $1-5 million per season to get reserved a seat for him.

There is another argument. Sharks get paid as cast stars. This is the most obvious case. However, it is convenient that ABC pays for the guest sharks.

How much do Shark Tank judges make per episode?

According to the TV guide annual industry report, 2014 Mr. Wonderful has made over $30,000 per episode. However, the magazine also stated that this is not a fixed rate. The average pay per cast star significantly varies on popularity, social recognition, and other socioeconomic characteristics.

According to Investopedia, The top eight most successful products that got their start in the Shark Tank have generated a minimum of $100 million in sales each. Here are the 8 best Shark Tank products:

Bombas is the most successful shark tank product of all time. The company originally produced socks and now its operations have expanded to manufacturing t-shirts. Mr. Daymond John grabs this valuable deal. He has invested $200,000 for 17.5% of the equity of Bombas. Bombas has reached $225 million in sales now due to the high demand.

The re-usable sponge-like a smiley face. Lori Greiner has invested $200,000 for 20% of the equity of Scrub Daddy. According to the founder, Aaron Krause Scrub Daddy had $100,000 in sales before it won the shark deal. Now the company has sales of over $209 million.

Personal care company, with the winning product of toilet stool. Lori Greiner has invested $350,000 for 10% equity in the company. In 2015 Squatty Potty had $20 million in sales and now the company has lifetime sales of over $175million.

The product is a special kind of exercise board. Lori Greiner has invested $125,000 for a 20% stake in the company. Over $160million in sales.

The product is a wearable blanket with a hood. Barbara Corcoran has invested $50,000 for a 30% stake in the company. Life sales revenue is $250million.

The product is a holiday-themed apparel product. Robert Herjavec has invested $100,000 for a 10% stake in the company. Before appearing in shark tank Tipsy Elves had $900,000 in sales and now it has over $125 million in sales.

Online flower sellers collaborated with eco-friendly farming. Haven’t won a shark when they pitched their concept but three years later Robert Herjavec got interred in their company and invest. Sales value is $100 million.

Sleep Styler is a heat-free hair roller made of memory foam. Lori Greiner has invested $75,000 for a 25% stake in the company. Sales value is $100 million. 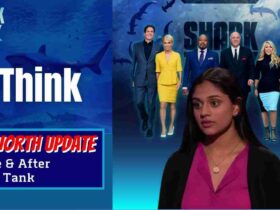