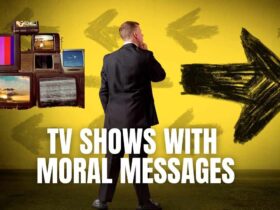 Tv makes you smarter or dumber is one of the main debatable and dependent issues we have all been hearing about for years. After the invention of the television, several questionable factors like watching Tv shows that are good for the brain came to the surface. Many of them tend only to highlight only the cons of watching Tv.

But after many years a great news was released for binge-watchers. Watching tv makes you smarter. So then the instant question that comes into your mind should be what should I watch to get smarter. Then let’s dig in,

Even though many try to prove only the bad effects of watching television some can confirm the opposite. Hence some can suggest the ability of understanding complex concepts after watching some shows.

Psychology of Aesthetics, Creativity and the Arts, published a one of related research with positive answers. They have done the study based on The Good Wife, The West Wing, and Mad Men. Also, they considered documentaries like Shark Week.

They conducted a few tests on viewers. Then found that many who watch shows can understand others’ emotions more than others who don’t watch. It proves social intelligence and emotional intelligence are higher. Not only that they were ahead when understanding complex plots and situations. But the study highly highlights that this depends on the drama. Also, they described how the result can change according to the quality and content of the drama.

Why does Watching tv shows make you smarter?

Making you smarter isn’t a fact for all the dramas you watch. Also sitting in one place for hours isn’t going to do any good for your health. But here are five facts about why watching tv shows makes you smarter.

1. Many of these shows are made with complex social relationships

Most of these dramas consist of complicated plots. Hence the viewers are always curious about what will happen next. According to the many experts in the field, this is a good brain exercise.

2. Because they force viewers to judge the morality of a character’s

These days dramas are not just based on love and romantic issues. The industry is paying attention to real social, political, and many engaging issues in society. So, viewers can take different aspects of a fact through the characters. Not only that they can develop their point of view.

Many script writers and directors are trying to touch different uncommon areas with their shows. For example, historical drama and drama created about scientific areas like robotics are now famous. Also, we can’t forget about the medical dramas to put into this list. Due to this many viewers get a chance to get information others are not familiar with.

It’s well-known fact that things we see are more easily remembered than the things we read. Also, many people dislike long-run informative history lessons is another fact. But what about a historical drama with real historical knowledge. No one is going to forget what happened in the palace and how the kings beat the political crisis.

All in all, you can cheer with your drama buddy as you have answers to how to increase your IQ while watching Tv.