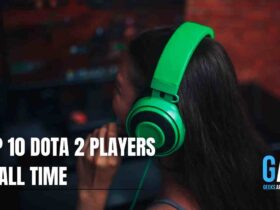 Most of the gamers are also interested in the fact how to make a game app. There is a rather important factor that nowadays that sum of money, which is spent on marketing and advertising is in most cases higher than the price of product development. This is not a perfect formula for every case. As for the average AAA game, its development budget is mostly rather high. In their work, the companies have to reimburse marketing. Also, it should be remembered that there are always additional costs, which can’t be predicted beforehand. Most gamers know what is a aaa game and that it can’t be cheap.

Well-known in the sphere of games, head of global development at Sony, said that last year the budget for developing a top PS4 game cost varied between $ 20 million and $ 50 million. This is almost the same as the cost of PS3 games, but then the price included not only development, but also promotion. It is also worth remembering that 10 years ago everything was different, and money had a completely different value.

Four years ago, Ubisoft CEO Yves Guillemot predicted that next-gen games will have a budget of around $ 60 million. We can say that all these respected people were right.

It’s quite logical that making game apps is a process, carried out by the developers. These people know how to make a mobile game. The cost of developer services depends in part on their location. Having outsourced the creation to the countries of Asia or Latin America, expect an average quality of work with a low price. Whereas developers from the United States will charge twice as much for their services, doing the work at the highest level. Having decided on the performers, as well as the size and requirements for the project, a team is formed. To create a simple game for android, a couple of developers are enough and the cost of the process will be lower, while for an AAA game you will have to hire a whole company or studio.

A typical game development studio would require the following command:

Renting an office for developers

The final cost of the project includes detailing the customer’s requirements, analytics, engineering, design, coding, testing, project promotion and management, as well as office rent. The rental budget depends on the developer himself and his choice.

When developing, you need to take into account the cost of equipment. In the process of development the game developers use special development hardware. The hardware should correspond to such factors, as being powerful. No big surprise that it’s price is rather high. While planning the budget this factor has to be taken into consideration.

There is a lot of different software on the Internet for developing a game app. Most users do not think about copyright for computer products, and yet this issue is not so simple. Studios in their work use only reliable equipment with a license.

Before spending hundreds or even thousands of dollars on the development of a game, it is worth considering that no one will know about this game. Therefore, preparing a marketing fund to enable people to learn about the game is an essential part of the plan. Beginners often assume that the game will promote itself, while the sharks of the gaming business easily spend on marketing a budget that may even exceed the cost of developing a design.