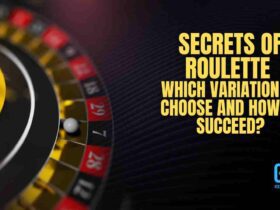 Secrets of Roulette: Which Variation to Choose and How to Succeed?

The gambling industry has undergone a massive transformation over the past couple of decades, with advancements in technology responsible for most of the changes.

That point is particularly pertinent where casino games are concerned, with the online sites helping to drive a huge growth in revenues in recent years.

The most radical change in how the industry operates can be seen in the way games are made, with modern technology providing developers with the tools to push the gameplay boundaries.

A great example of this are online slots games. The very first slot machine launched in the 1890s had three reels, a handful of symbols and a 50 cents jackpot.

Fast forward to today and the best slot games are hugely immersive creations that have the ability to keep players engaged for hours on end.

The development process is extremely labour intensive, requiring input from a big team of people possessing a wide range of skills. We take a closer look at how online slots are created.

How slots development has changed

The first slot machine – the Liberty Bell – was purely mechanical. It was created by Charles Fey, who was responsible for the design, manufacturer and sale of the finished product.

Things are very different in the modern era, with online slots development requiring collaboration from at least a dozen different people.

After thrashing out ideas about the required slots theme, the team set about coding a prototype of the game to take into an initial testing phase.

Any flaws or major bugs are identified and resolved at this stage, before a primary version is made ahead of the final development phase.

The game then undergoes stringent testing to iron out any last minute problems, before being licensed and launched onto the open market.

Slots in the modern era

As mentioned previously, the earliest slot machines were very basic. They featured just a few symbols such as fruits, bells and sevens.

In terms of gameplay, players were required to pull a handle to spin the reels and await the outcome. There were no other features.

The arrival of video technology completely changed the landscape in slots development, and this has continued apace into the online arena.

Most modern slots now boast a ton of special features such as wild symbols, sticky symbols, nudges and mini-games. There is also the all-important slots theme.

This will be something taken from another popular genre such as television shows, movies, music, horror, mythology, superheroes and many more.

Developers use editing tools such as Adobe Photoshop to take elements from the theme and incorporate them into the game’s symbols and bonus features.

The psychology behind online slots

The slots theme is undoubtedly a key factor in whether a game will be successful once it has been added to an online casino’s portfolio.

Generally speaking, it is the main factor in why players will choose to play a particular game. For example, fans of a TV show will favour playing a game based on this rather than other themes.

Respected gaming researcher Dr Mark Griffiths describes the reason behind this as the ‘psychology of familiarity’ – effectively, players choose slots themes they recognise.

Developers expertly leverage this methodology to their advantage, repeatedly creating slots games that tap into this human psychological trait.

In addition to the slots theme, the journey through the game to win the big jackpot is now widely viewed as being as important as actually scooping the top prize.

This taps into the human desire to be competitive. Players want to feel that their decisions have made a difference along the road to winning big,

Slots development in the future

Technology has unquestionably had a major impact on slots development in recent years and this trend will continue for the foreseeable future.

Increased scrutiny from licensing and regulatory organisations has triggered a greater focus on security within the online casino sector, helping to create a safer environment for players.

This has helped gambling operators attract more players to their sites, and increased footfall inevitably generates more demands from consumers.

Developers are increasingly being tasked with pushing the envelope in the design of slots games, and there are plenty of exciting innovations on the horizon.

These include Big Time Gaming’s Megaways mechanic, which has taken slots development into a completely different stratosphere.

Another emerging technology that has been tipped to have a massive impact on slots games is virtual reality (VR), which has skirted on the fringes of the sector for some time now.

With the supporting headwear now finally capable of living up to expectations, it would be no surprise to see VR slots take over from traditional online slots over the next few years.

This is tremendously exciting news not only from a development perspective, but also from the point of view of slots players. As the old saying goes – the possibilities are endless!