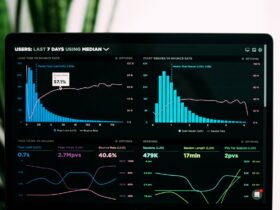 Experience The Efficiency of An Activity Monitor

It feels like we’re in a new world with all the gadgets we have today. It wasn’t long ago when we were introduced to the boxed type computer available only for office use. Now, just a few years after the great computer era, we are seeing today a new form of technology that surpasses our expectations. A handy gadget such as laptops, cellphones, tablets and iPads can perform what a desktop can do in a more portable manner.

Just imagine a small gadget that can perform exactly what bulky computers can do. How amazing is that? Today, more business owners are discovering how important these devices are with the operations in the work and office. Professionals even stand by tablets and iPads and how much they make the job easier and more convenient.

Indeed, tablets and iPads are truly majestic. But surely, they have differences and similarities. Let’s dive in and see how these gadgets perform in specific aspects.

Apple announced its best and most portable iPad in the market on April 21, 2021. The brand’s high-end tablet computer is the iPad Pro. The new versions have a powerful M1 CPU, a Thunderbolt connector, an enhanced front-facing camera, a display option of Retina XDR mini-LED on the bigger model, and up to 16GB of RAM and 2TB of storage on the larger model. And fun fact! Did you know that Apple releases a new iPad Pro every 12 to 18 months?

For leisure and productivity tasks that benefit from the larger display, the 12.9-inch iPad Pro is the ideal choice. Being said, this iPad Pro is good for movie binging, game streaming, and tasks that either a laptop or desktop can do. Its screen size is best for work because you can see them easier and a lot better, like when you use a desktop monitor. Even though the screen is considerably larger, Apple doesn’t support 4k res to their iPads. This lack of feature is because most people hold the gadget far away from their faces with the current resolution. Also, adding that kind of resolution drains the battery life quickly.

Aside from screen size, the Apple 12.9-inch iPad Pro is good with its technology display. The 12.9-inch model has a mini LED display, 120Hz ProMotion, P3 broad color, and True Tone. These combinations enable the larger iPad Pro to deliver full-screen brightness of up to 1,000 nits, peak brightness of 1,600 nits, a 1 million with 1 contrast ratio deeper blacks, and a true-to-life HDR. The 12.9-inch model is also recommended for users who watch or create HDR content or simply want a sharper display.

The Apple 12.9-inch iPad Pro model employs Apple’s m1 chip, originally seen in the MacBook Pro and MacBook Air. In contrast, the next-generation model is projected to use the M2, a forthcoming CPU that promises to be faster and more efficient than the M1. It is believed to contain the same 7 to 8-core CPU, but a 9 to 10-core GPU is possible.

An eight-core CPU with four high-performance cores and four high-efficiency cores is included in the M1 processor. High-performance cores are optimized for single-threaded operations that require a lot of power. The M1 chip four high-speed cores can work together to provide excellent multithreaded performance, outperforming even the most expensive 16-inch MacBook Pro models.

The Samsung Galaxy Tab S7 also features an all-screen design and an aluminum frame. This slate, available in Mystic Black, Silver, Bronze, looks eerily similar to the 2018 and 2020 iPad Pros. This is not a terrible thing because there’s limited room for customization when you reduce a tablet to just its screen, which is what we want precisely. Samsung’s color selections and Mystic finish appeal to me more than Apple’s.

As for the screen’s brightness, the Galaxy Tab S7’s is rated up to 500 nits. But if it is tested to a colorimeter, its maximum brightness can reach 499 nits. (In comparison, the 599-nit iPad Pro is now much brighter.) The Samsung Galaxy Tab S7 sports a smooth 120Hz display refresh rate (that the iPad Pro doesn’t have) and the Surface Pro, which provides buttery-smooth action. Testing it may require enabling the setting to watch videos played and text scrolled more smoothly. The Galaxy Tab S7 also supports the 4k resolution on YouTube.

Moreover, the Galaxy Tab S7’s front-facing camera is excellent for video conferencing, and its rear camera would suffice in a pinch. Still, photos taken with the rear-facing 13MP camera performs a decent job. The Galaxy Tab S7’s 5MP ultra-wide camera on the rear is only useful when you need to take wider photos because you lose a lot of detail. Interior images of artworks, for example, may appear more smudged with ultra-wide shots.

Now, let’s talk about its battery. The Galaxy Tab S7’s 8,000 mAh battery lasts more than a day on a Wi-Fi surfing-based battery test, clocking in at 13 hours and 16 minutes. That’s faster than the iPad Pro and iPad Air and more than 5 hours faster than the Surface Pro. The Galaxy Tab S7 is rated for up to 14 hours of movie playback by Samsung. But take note that enabling the 120Hz refresh rates will deplete your battery.

The Key Difference Between The Two Tablets

It has been stated in the review up there that the Apple 12.9-inch iPad Pro doesn’t support the 4K res, which Galaxy Tab S7 does. That’s a great feat for today’s advancing technology that we have. But sometimes, that doesn’t show that having the 4K feat means you’re all above the competition. The greatest feature of Apple’s 12.9-inch iPad Pro is their M1, which the Galaxy Tab S7 doesn’t have.

The Samsung Galaxy Tab S7 also has a ratio of 2800 x 1752 pixels, while the Apple 12.9-inch iPad Pro has 2732 x 2048 pixels. The Apple 12.9-inch iPad Pro has the M1 chip, while the Samsung Galaxy Tab S7 has a Qualcomm Snapdragon865 Plus, with the M1 chip as the most advanced today, knocking out every competitor. In addition, the single-core processing on the iPad Pro is coming in around 1700, and the multi-core processing is 7,300. The Snapdragon, on the other hand, has 934 for single-core processing and 2828 for multi-core.

When it comes to RAM, the iPad Pro has a starting gigabyte of 8GB and can be up to 16GB for models that have more storage. Whereas the Galaxy unit, it only starts with 6GB and goes up to 8GB if you go with models that have more storage space. But storage is pretty similar, with these two both starting at 128GB. The iPad Pro can go up to 2TB storage, while the highest configuration with the Galaxy tab maxes out at 512 GB storage. Still, the Galaxy Tab has a Micro SD slot, which means you can expand your storage by putting a memory card on it at a lower price.

When talking about screen displays, the iPad Pro has a beautiful 12.9-inch mini led display, while the Galaxy Tab S7 has a spectacular 12.4-inch super AMOLED display. The two tablets have a drastically different aspect ratio, with the iPad Pro being more squared off and the Galaxy Tab S7 sporting a more elongated design. The iPad Pro is definitely a lot bigger because even though it is a little bit shorter, it’s a lot wider. The Galaxy Tab S7 is both smaller and lighter for portability. Between these dimensions, you can decide whether you want a larger tablet or a more portable one.

Similarities Between The Two Tablets

Both tablets are very similar, in their sleekness, thinness, and having a solid machine aluminum. The Galaxy Tab and iPad Pro have small bezels, rounded corners, squared-off edges, and a matte finish. Too, they both have a USB-C port, and face recognitions.

Apart from all those amazing features, both tablets are also good for editors out there! They are pretty much similar with drawing and pen capabilities. Their pens are all pressure-sensitive which means you can draw a thicker line by pressing them down harder. You can even charge them wireless by simply attaching them magnetically to the tablet.

Best Use For Each Tablet

The iPad Pro is best for drawing because of its pen responsiveness. The device even introduced palm rejection. If you have experienced that whenever you draw with a tablet device, you are always left with many little lines and dots where your palm was on the screen, then the iPad Pro takes care of that. It is amazing how such a small improvement dramatically improves users’ experience for the entire device.

Which is the Winner?

The winner of this bout is the Apple 12.9-inch iPad Pro. Even though you can put a memory card with Galaxy Tab S7 and add memory to the device, the M1 iPad Pro is absolutely more powerful in terms of processor. It has maximum RAM, a better camera system, and a better keyboard and trackpad option with the magic keyboard. It also has a better HDR display than Galaxy Tab S7.

The iPad Pro also has a more refined app ecosystem, and it is a part of a complete hardware ecosystem with components like the iPhone, Apple Watch, MacBook, and Mac desktops. Also, this latest iPad Pro is super-fast. It’s similar to the performance of a PC. It also supports multitasking in a split-screen mode which is ideal for the extra space of the 12.9-inch screen of this tablet.

Tablets are user-friendly devices. Tablets provide consumers with a pleasant and seamless experience, unlike some other devices. A tablet makes reading, typing, and viewing videos easier than a smartphone or even a laptop in some situations. Tablets are popular for both business and play, so you can easily bring them to your big meeting or when traveling to the beach for the weekend. And if you’re only going to use the tablet for work, it’s so light that you can hold it in one hand. A portable computer indeed!

When was the first tablet released?

Originally, the first tablet PC was released in 2001 by Microsoft.

What is the most expensive tablet today?

What is the main reason for the creation of tablets?

According to Alan Kay in 1972, the purpose of the tablet, also known at that time as Dynabook, was to have a personal computing device for children that works pretty much like a PC.

What is the cheapest tablet today?

Aakash 2 is the cheapest tablet today, and it was invented in India. The tablet costs only 2,263 Indian Rupees or $40 today.

Can you navigate a tablet using a mouse and keyboard?

It is possible to use a keyboard and mouse on a tablet. You just need a USB-OTG or connect them wirelessly to support a Bluetooth connection.

Are You Looking for a Good Quality Product?

Come and check the most popular products today and see what they can do. Product Fight has got you covered in this regard! Whether it is for Lawn & Garden, Electronics, and Computer & Accessories, you can trust us to provide you with the best and only the best.